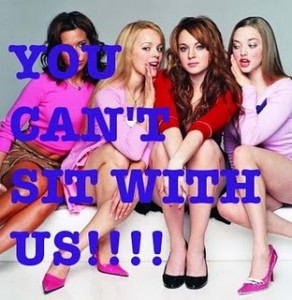 Even before I was assigned homework in improv class to notice interactive hierarchy, a seventh-grade memory has been replaying in my head. It’s probably because I recently reunited with a high school pal and because I’m taking a lot of personal inventory to better align my profession with my true self that this moment in my childhood keeps surfacing. But this moment in time speaks to social hierarchy, as well as the greater impact of wealth, opportunity and our inner well-being. This rather incidental moment had a deep, emotional and life-long impact on me.

Seventh grade meant a new school consisting of grades seven, eight and nine. If it wasn’t the first day of seventh grade, it was in the first week. I was sitting in homeroom with a whole new group of girls who would become some of my new friends for the next several years. There weren’t any girls from grade school in my homeroom so I was already the outsider, which meant being accepted and fitting in were even more paramount. But adolescence had been kind to me and I had effortlessly dropped twenty pounds that summer. I was the cute, thin girl with long brown hair. Who knows if it was how I looked, how I dressed or how I behaved that brought us together. It was seventh grade so it was probably something familiar and shallow. But we were a table of sweet, well-behaved and happy girls. It must have been before homeroom started when another girl, whom I’ll call Abby, dropped in to visit with one of my new friends at our table. After the initial introductions and “I like your shirt” sorts of exchanges, Abby talked about a girl she just met, who happened to be a girl I knew from grade school. Abby said this girl asked her is she was rich. Abby said she replied, “We’re not rich, but we’re well off.” Even that remark halted me a bit because I don’t think I’d ever heard someone describe themselves as “well off” before. Abby then said this other girl said, “We are,” rich, that is. “We have wall-to-wall carpet.” Abby then burst into laughter. I am not sure how the others responded but no one objected to her remark. It was, after all, the first week of seventh grade where the primary, perennial theme of judgment was in its infancy.

Did someone say “Mean Girls?” I didn’t defend the wall-to-wall carpet girl, whom I will call Eva. If I said anything, I may have mentioned I knew her from grade school but I might not have offered any information that would somehow link me to the person who was the butt of the joke for Abby, who was clearly establishing herself as the Alpha female. What I did not share and what only I at the table knew was that Eva was a new American, having moved to the U.S. in first grade. English was her second language, although you would never know it as she had no noticeable accent. If she hadn’t been through war and significant difficulties, her mother had. I don’t know if her father was even part of her family by then. But even in seventh grade, I knew none of that mattered to Abby. To Abby, Eva was different and a lesser person to think carpeting made you rich. Funny thing is Abby was pretty rich by the rest of our standards. Her father was a doctor and she lived in the more exclusive part of town. I can only imagine what she considered rich because I was much closer in status to Eva than Abby. And that was the primary reason I said nothing, if I wasn’t aware of the reason at that moment.

I never did become close with Abby. I also lost connection with Eva. If I could go back in time, I would explain Eva to the girls so they might understand, if not feel more compassion. But that wasn’t me in seventh grade. And I don’t think I am all that different than a lot of thirteen-year-old kids. I didn’t want to stand out as the “other” to avoid being the next Eva joke. I wanted to be accepted. I wanted to be liked. Instead, I drove my mother crazy demanding the right jeans or top or electronic device to fit in. Anyone who says high school was the best time in their life is nuts or lived in a cocoon. I wouldn’t go back to that “Lord of the Flies” for $10 million. Being kind and nice were seen as weaknesses for the most part.

But oh how those moments stick in memory. Lots of adolescent moments do. And how they form us into adults. I doubt Abby and Eva even remember each other, although if I had to bet, I’d say Eva remembers Abby more than the other. I also can bet Abby’s still “well off” and Eva not so much. Because even though we all went to the same school, and while many on the political right like to preach it, we don’t all have the same opportunity. A doctor dad has a whole lot more professional connections than a single, immigrant mom. I didn’t follow either girl’s academic record but I know Abby was no genius, in spite of her social status. And Eva was an average student but she spoke two languages as a toddler and she always kept up in grade school. Still, unless Abby had a lot of bad luck and made a lot of bad choices in her life and Eva got all the breaks and made every smart one, I can bet Abby is still “well off,” while Eva hasn’t had as many opportunities for advancement. OK, I know this to be fact. I Googled. Eva still lives in the same apartment complex. Abby married a professional.

Now, you can’t measure happiness by life challenges or by family economics. And before anyone claims I am drawing conclusions from a single example, I submit that life has far too many twists and fateful turns to draw a valid conclusion that birth status equates adult success. Eva might be much happier than Abby. I hope she is. If Abby’s attitude toward others hasn’t changed since her seventh-grade homeroom snark, she probably isn’t happier that Eva. But to borrow and then twist a quote from the great Ann Richards, being born on third base without hitting a triple doesn’t guarantee a run but it helps.

Maybe I am the one most impacted by this moment in per-pubescent time. I can only speak to its impact upon me. I mentioned my socioeconomic status was closer to Eva’s than Abby’s. Thank goodness Mom and Dad gave me a good brain and emphasized learning. This country doesn’t provide a social safety net of any real comfort to those who need it so I got my degree as fast as I could and got my Masters after I’d saved up the money. I also was keen and careful about my choices. Maybe there was a part of me that wanted to stay above becoming Eva and at least dog paddle above water, if not swim closer to Abby. It is even possible I made some choices because Abby the Mean Girl made social class a critical piece of my adolescence. I do know unweaving some of these memories within improv and in my personal discovery is meaningful to me. Perhaps you can relate.