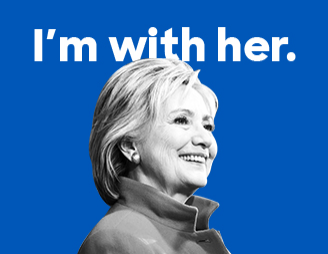 I will be casting a presidential preferential ballot at the Minnesota Caucus this evening for Secretary Hillary Clinton. I was raised as and remain a Socialist, which is to the left of a Democratic-Socialist so some may find my choice incongruous. It is not. First, I am far too pragmatic to let “love” of a candidate influence my decision. My reasons go beyond what I personally want. And before anyone thinks this is a vagina vote, it is certainly not. Now, I want to live in a country that has universal health care, free college, fair taxes, clean energy, a repaired infrastructure, a reformed prison system, security for older adults and greater opportunity for underprivileged citizens. I also want to obliterate Citizens United, restore voter protections in southern states and stop Gerrymandering that has fixed the House elections until 2022. My decision comes from deep reflection and study of our current reality and what is needed to steer this massive cruise ship that is these United States. Politics is the long game.

Look, I’m not here to fight with those who support Senator Sanders. And I know I will get those posts. I’ve heard it all and believe me, I have been paying attention. I have heard Senator Sanders speak on Thom Hartmann every Friday for years and years. I know him very well. He’s a wonderful man and public servant. I agree with his views, for the most part, as I do Secretary Clinton’s. But for personal and pragmatic reasons, #ImWithHer.

A vast majority of people on both sides of the aisle have been influenced by the “vast right-wing conspiracy” designed to smear both President Clinton and Secretary Clinton. Some conflate what Bill Clinton did as president between 1993 and 2000 with what Hillary Clinton did. She gets a lot of criticism, in part, because she has done a lot. Like you, I am disappointed in some of her and President Obama’s decisions, as well. I am not naive to the influence of big energy, big pharma, Wall Street, yadda yadda. We have a useless media. It’s nothing more than an arm of corporations that make sick money in an election year. True investigative reporting and candidate vetting are quaint memories and propaganda has replaced journalism. But neither am I naive to our current reality that will not change before November.

I don’t want to talk minutia of issues because both candidates are clear about their platforms. It’s easy to search. Nor do I want to talk Benghazi. Libya, Goldman Sachs, Whitewater, Vince Foster, the Iraq resolution, speaking fees as a private citizen or Super PACS. Secretary Clinton is the 11th most liberal senator (I know, in a right leaning Congress) and most respected and admired woman in the world. She is a global influencer and accomplished. She’s got this. She’s tough and diplomatic. I want a president who can get things done. Obama has had one hell of a battle with a traitorous Congress and look what he has still managed to accomplish. We may flip the Senate but the fix is in for Congress until 2022 when new District lines will have been drawn. Our next president will have a similar battle because the GOP are a cult of bullies and will treat any Democratic president the same as they’ve done for our current one. But Hillary plays and can play a different game than Obama. She’s gonna kick ass and take names. She is married to a guy who did that pretty well.

I hate money in politics. I would like to see a short election process like Britain. I’d like it to be illegal to have secret Super PACS, corporate donations of any kind and replace it with public funding only. But that’s not going to be like that between now and November. Purists, I hate to break it to you but if you want to win, to beat the smears by those Neanderthal, poo flinging, backward bigots on the right, you need to beat them at their own game, at the game that is set for 2016. Hillary can do it. She’s a Weeble; Weebles wobble but they don’t fall down. And they know it! The reason the GOP seems to be putting up their “Z Team” for this November is because they’ve resigned they’ve lost. Unless they aren’t against Hillary. My opinion.

OK, go ahead and get you fingers ready to show the polls that she loses to Trump. Not buying it. And if millennials or anyone else want to sit it out in protest, I can’t stop you. But I know what happened in 2010 when we lost the House. This is a bigger pot, folks, and I submit you would be letting more people suffer under a Republican president. Elders, children, the disabled, working poor need Democrats. They need a president who will help.

David slayed Goliath but our GOP Goliath is salivating to fight Senator Sanders, should he be the nominee. Further, without that nasty, dirty money you right-fighters abhor, the Dems lose down ticket. Hillary has already been deeply committed and involved in state races. This is vital. And it takes money in today’s reality. This is not a sport’s game; it’s people’s lives, it’s our planet and if it takes a boat load of money to get some sanity back to our government, bring it. I am a realist.

To end with some personal observations that can’t be overlooked, I believe Hillary has the temperament to be president. She has to be even tempered because if she raises her voice in a rally, Bob Woodward says “She shouts.” Look at the tempered man we have now. It is amazing. Bernie does not have the temperament to be president. He’s passionate but he’s also volatile. That’s great on the stump, but it’s not effective as a world leader. My opinion.

Now, as a woman who is not voting her vagina, I can’t ignore the sexism Hillary has endured. I hope we can get past it in 2016. But I thought we could be post-racial after 2008 and look what happened.

For all that is good, please vote, caucus, volunteer for the candidate you support. But, please, if your candidate is not nominated, be adult and vote for the rest of us. Peace.