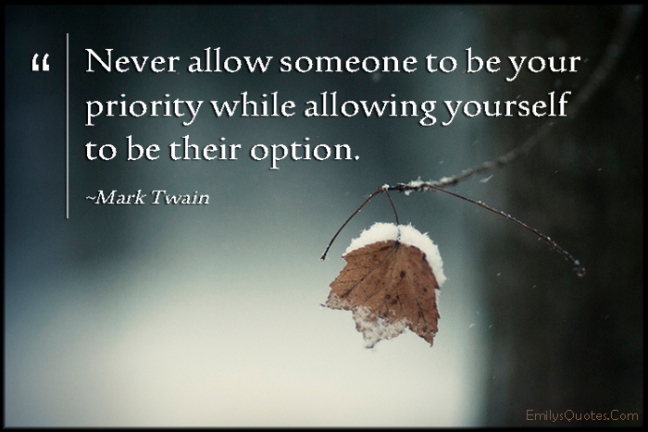 Today’s Deb-Blog Has Been Brought to You by the Letter D for Defining and the Letter V for Values: Actions Reveal Values Better Than Words

It’s pretty obvious and generally believed that we value the things we give of our time, energy, emotions, thoughts and money. Our actions reflect who we are, what we fear and need and love – what we value. I realized that when I give of myself to a job, a project, a friend, a relationship, my commitment is unwavering and my effort is my level best. I am simply not a half-assed sort of person. Sadly, that is not often the case in return. And while I don’t expect everyone to share my personal standards, my efforts often leave me feeling used and unappreciated. Lately, I’ve been having a good look at why that is so.

While it was probably 20 years ago, I have a great visual of what I mean. I was truly, madly deeply in love with a man when we went to see “As Good As It Gets.” The moment Jack Nicholson said, “You make me want to be a better man,” I burst into tears and could not stop. Here’s a clip of the full scene:

To see just the section to which I refer, click here. http://www.tubechop.com/watch/7826321

(All I can say, man of my past, if you happen upon this post, good!) This incident crystallizes how I approach my world.  And as best as I can conclude from his side, he did not. I wish him well. I valued him and what I could be with him in my life. There is, frankly, no other explanation to how I function: I equate being happy with being better, kinder, more responsive, more successful and more joyful with others.

Mark Twain wrote, “Never allow someone to be your priority while allowing yourself to be an option.” But when it comes to human interaction, by the time you learn by someone’s actions you are only an option, it is hard to cut and run.

I was also in a relationship with a man who, on his best day, placed me third but usually fifth or sixth. His words of devotion and love were endless but his actions contradicted them. And even when I broke up with him, his words were never about me but about himself.

And while it is painful when others aren’t as committed, willing to strive to be better or are plain unappreciative, what is worse is the resentment which can manifest as ostracizing or sabotage in the case of work, or lack of intimacy and trust in personal relationships. I had a job where I had more industry training and experience, as well as more respect among peers and the public and more formal education than my supervisor. But most people thought I was her boss because I was the one they came to for help or to facilitate responses. It never bothered me because I felt I was an asset in my position. I was growing and thriving and making things better for most. She undermined me with a person of lesser skills and abilities and fired me. I wasn’t valued for my work or successes, I was resented for them. And such have been many of my employment experiences. Competence and joy can be seen as weapons by those with little of either.

Criticisms aside of Abraham Maslow’s “heirarchy of needs,” which he proposed in his “A Theory of Human Motivation,” it is obvious to me that personal motivations or needs manifest in actions and can be the root of this dissatisfaction or conflict I encounter. Demonstrated in the following pyramid, Maslow posited that one’s needs and motivations climb the chart as our human needs are met. And while it appears that an individual would experience less conflict as basic comforts are satisfied, dealing with others whose basic human needs aren’t met causes a great deal of stress and conflict. People can feel threatened and act primitively toward someone who is operating from a different level. I struggle implying that I have worked or been involved with others who behave at some “lesser” level but I also struggle finding another way to understand my experience. 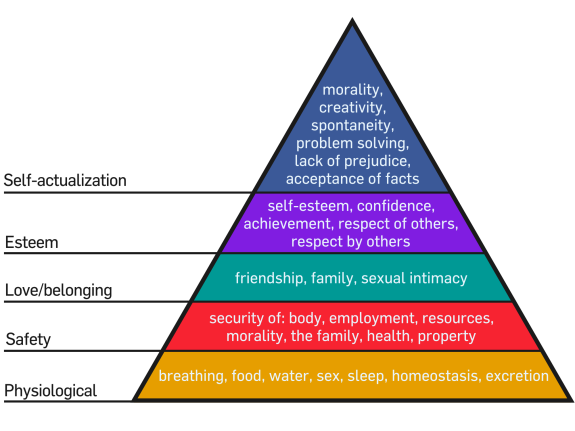 Take a gander at the folks salivating and gnashing their teeth at a Trump rally and you will see what I mean. Many of those drawn to his “anit-other” rhetoric are operating from a level of unfulfilled lower needs. In their mind, rather than self-reflection and personal motivation, life is scary or lacking because of the actions of others. Things would be better if I wasn’t reminded of someone else’s achievements or perceived satisfaction.

Sometimes I think having two loving parents who lacked addictions, whose word was without fail and whose home life was of constant peace did not prepare me for the massively screwed up world, workplaces and friends. That is why those values I still have today have often been met with conflict in the screwed up world out there. But it has kept me treating others as I would like them to treat me. I just got luckier that most, I guess. I learned gratitude, kindness, self-determination and independence from an early age. Those serve as great shields to the pettiness and nastiness that is all too prevalent.

“Too much of a good thing can be wonderful.” Mae West

Indeed, Mae, indeed. So which is it, “quantity or quality?” asked the girl with commitment issues. Decision?

Both. In both there is a measured enough. Plus considering the option is a good exercise to know what you truly value.

If it’s quality you desire, satisfaction is your measure. Your sense memory holds an enduring, satiated state. Your standard has been met. You feel calm in being aware of, knowing and appreciating quality.

On the other side of the coin, the satisfaction in quantity also holds a feeling of contentment. Your experience and satisfaction remain in the sense memory. If quantity is your standard, you feel the equivalent state of calm and an awareness of and appreciation for the quantity enjoyed.

Our daily lives are filled with quantity and quality choices, some without great consequence like premium or regular gas, vending machine chips now or veggies when you get home, cleaning the bathroom for company with a quick wipe or deep disinfecting. Other quality and quantity choices with greater consequence might be to save years for a rainy day or for a big purchase or spend a little money regularly on small enjoyments, take a job you hate for big bucks or do work you love with other rewards or wait for Mr./Ms Right verses take Mr./Ms Right Now and now and now? Every choice has consequences.

Choosing quality in life is great. Of course, it will edit what you bring into your life. Limiting your own choices may be worth it, even if satisfaction is delayed. If you don’t achieve the same measured satisfaction in quantity and are left longing for the quality, it’s worth the wait, unless your measure of quality was wrong.

Quantity definitely has its benefits. Variety is the spice of life, they say. Life is finite so getting as much as you can out of it is great. In quantity there is less regard for delayed gratification, which might not be worth the wait and might never come. And quantity may be the route to finding what one truly wants, even if what one wants is quantity, unless you missed the quality filling up with quantity.

In either case, desire rooted in envy, gluttony, greed, anger, pride, laziness or lust (the seven deadly sins) is poisoned and will never fully fill your wish, void or desire. Nothing good comes long term from those seven deadly sins and there are always negative consequences. (I have this theory about karma that the longer it takes for bad deeds to catch up to you, the worse your karma. Think O.J. Simpson. If I commit a small wrong and get payback in the same day, I am simply grateful for the lesson.) Materialism is our culture’s best example of bathing in the deadly sins and encompasses at least five of them. I’ve never known anyone driven by materialism who isn’t substituting for a deeper, inner desire for which neither quantity or quality will ever be met.

The choice of quantity or quality is the road diverging in Robert Frost’s yellow wood but which for you is the one less traveled and, therefore, the one that makes all the difference? Can you achieve the perfect blend of both? I don’t think anyone can tell someone else what is right for them. Perhaps the right choices is feeling a happy medium, in which case Mae just might have a point.