Remember the classic fable “Brer Fox and Brer Rabbit, where the rabbit baited Fox by begging him not to throw him in the briar patch, which he knew his fox enemy would do out of hate and where he wanted to be all along? That’s a great lesson and those fables Mom and Dad told me as a kid are eternally true.

The same can be said for anything forbidden. Tell a child not to touch the hot stove, date the bad boy or stick little brother’s fingers in the electrical socket and their temptations grow. I love the countless stories about bigoted parents who forbid their son or daughter from dating a person of a different race only to be shown later in family photos with their cute biracial grand-babies. It is a delight!

The ancient Greeks had the phrase “wine, women and song.” Now it’s “sex, drugs and rock and roll.” Laws against vice are just silly and futile because trying to legislate or reign in moral choices only leads to more social and legal problems, with massive costs to society and addicts and sex workers in jail. What some call “vice” and I call human nature is never going away! Well, I suppose Singapore and places with Sharia Law are trying in our modern era but look how well that’s working. Hey, morally superior zealots, you can’t stop people from temptations. And it surely will come back to bite you, granted in places you might like to be bit, unfortunately. You pious Christians ought to know the Jesus line, “Judge not lest ye be judged.” And boy howdy, is the hypocrisy rich to see! Remember Larry Craig, the anti-LGBT senator who got caught soliciting sex from a male cop in the Minneapolis airport bathroom stall? Then there is the crystal “Meth”-odist minister Ted Haggard who preached against drugs and for anti-gay reparative therapy who got caught doing meth off the naked back of a male hooker? This paragraph of hypocrisy just writes itself. And now we have at least three Republicans who impeached President Clinton over a barely even, almost pathetic affair but between consenting adults, who themselves are now convicted of pedophilia and who were have multiple extra-marital affairs while they were chastising and impeaching Bill Clinton! Just stop!

And for those of you who want a sexual purity test for elected officials, I submit some of our greatest presidents were quite sexually active and happy. I care about their legislative morality that impacts the citizens, not their sexual proclivity. It’s ridiculous. And what about the ones having affairs who don’t get outed? Does that mean it’s OK? We are such Victorians. Europeans think we’re fools and rightly so. If you want to judge the legislative abilities of a candidate based upon his sex life, let’s just quit discussing policy and put a massive team of journalists on the job of nothing but sniffing every candidate’s shorts. If it means that much to one’s ability to govern well, let’s have a purity test.

Now, I am an everything in moderation kind of person. And I am entirely faithful when I’m in a relationship. I also don’t do drugs and always pay my taxes. I just don’t have an addictive personality. I’m lucky and do not like the consequences of those choices. But I only have compassion for people who are addicted to anything, whether it be drugs (prescription or otherwise), gambling, sex, food or alcohol. As for prostitution and drugs, decriminalize the lot.

It’s the spice of life, a delicious morsel, and I’m not just talking about food! Or how about that great overindulgence of binge watching a great series. Or a rich, taste bud thrill (and I’m not just talking about food). Just too much of any good things every now and then is wonderful! Enjoy the things in life that please the senses! Live, laugh, love. Life is short and death lasts a long time.

I rated this blog PG so I won’t post porn pics. But I would love to post a few because I find our puritanical views of sexuality in our society absurd and unhealthy. We shield kids from breasts yet by the time a child reaches 18, he or she will have seen 40,000 murders in the media and 200,000 acts of violence. Now I don’t know about you, but I was raised to become an adult who has sex, not shoots people with guns. Why does our society get so upset about showing a human phallus but would never pixilate an assault rifle? (That’s hilarious on so many levels.)

Admittedly, action films are not my genre so I don’t see the appeal in violent, physical conflict. But it seems if one is titillated by acts of violence, one wants to see it again. if it doesn’t have a direct correlation to violent behavior, the amount of violence in the media certainly desensitizes us. I’ve seen my share of violence on TV and I don’t want to own a gun or be near one but other people are wired differently and might find a thrill in violence. It’s no secret how high our gun deaths are compared to the rest of societies. And is it any accident that we now have a diminished manufacturing industry in this country except for guns and ammo? Hell, we teach our military with warring video games. Surely there’s some correlation to make. This whole paragraph creeps me out. 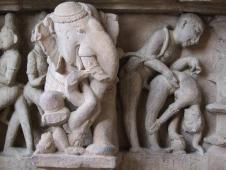 Much of it is erotica. They have their share of warriors, too, but today’s culture holds no c

omparison. And remember when Attorney General John Ashcroft spent $8,000 of taxpayer dollars on blue drapes to cover the lady parts on two statues in the Great Hall of the Department of Justice? Childish. Meanwhile his boss was invading a country on false pretenses, that killed and maimed hundreds of thousands. That’s some messed up priorities.

What our society has deemed to need a big X to block the view of innocent purview calls for a long overdue taboo review.